Home » Lies, lies and lies are all that PM Modi has spread about Jawaharlal Nehru

Lies, lies and lies are all that PM Modi has spread about Jawaharlal Nehru

While campaigning for the 2019 Lok Sabha election, Prime Minister Narendra Modi did not miss out on any chance to target first Prime Minister of the country Pandit Jawaharlal Nehru. Instead of talking about real issues, all we saw was PM Modi putting all blame for anything and everything on Nehru ji.

Let’s see some of the lies spoken by PM Modi about Jawaharlal Nehru:

“When Shaheed Bhagat Singh, Batukeshwar Dutt, Veer Savarkar, greats like them were jailed fighting for the country’s independence, did any Congress leader go to meet them? But the Congress leaders go and meet the corrupt who have been jailed. Congress is supporting those who are corrupt. Such things cannot be accepted,” PM Modi said while addressing a rally in Karnataka on May 09, 2018.

However, this is nothing but a blatant lie spoken by our PM about Independent India’s first PM.

Here is the front page of the Tribune newspaper’s 10th August 1929 edition which reported about the meeting between Jawaharlal Nehru, Bhagat Singh and Batukeshwar Dutt (among others). 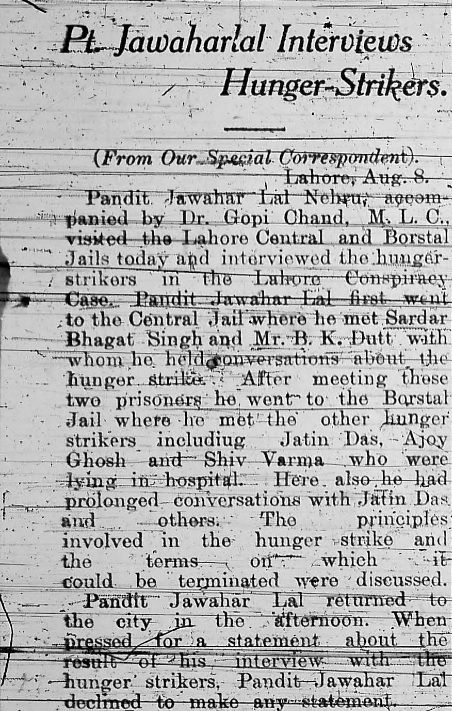 “Karnataka is synonymous with valour but, how did the Congress Governments treat Field Marshall Cariappa and General Thimayya? History is proof of that. In 1948 after defeating Pakistan, General Thimayya was insulted by PM Nehru and Defence Minister Krishna Menon,” PM Modi said in Karnataka last year.

For his information, General Thimayya became the Army Chief in 1957. And VK Krishna Menon also became the Defence Minister in 1957.

“When Pandit Nehru had once visited the Kumbh Mela, a lack of planning and preparation led to a stampede. Thousands died. But to protect the government’s reputation, to make sure Nehru was not blamed, the media did not highlight this story,” said PM Modi in Uttar Pradesh’s Kaushambi in April.

The Quint fact-checked PM Modi’s statement and found that Jawaharlal Nehru had reportedly spoken to the media post the incident and said that he was surveying the crowd from the balcony of a fort at around 9:45 am-10:15 am. The stampede is said to have occurred at 9:00 am.

While campaigning for the 2014 Lok Sabha election, PM Modi had claimed that Jawaharlal Nehru did not attend Sardar Vallabhbhai Patel’s funeral in Mumbai in 1950.

News Central 24×7 mentioned Nehru’s statement which he made in the Parliament, which goes like, “[Patel] will be remembered as a great captain of our forces in the struggle for freedom and as one who gave us sound advice in times of trouble and in moments of victory, as a friend and a colleague on whom one could invariably rely, as a tower of strength which revived wavering hearts.”

Here is a video which shows Nehru ji’s presence at Sardar Patel’s funeral:

5) Jawaharlal Nehru did not care for farmers

The ‘red rose’ reference can be to nobody but only Nehru ji.

The Telegraph reported that the father of the Green Revolution of India, M.S. Swaminathan had written, “Phase I (1947-64): This was the Jawaharlal Nehru era where the major emphasis was on the development of infrastructure for scientific agriculture.”